Previously, on A Thousand Other Worlds: My soap rehab failed and I came back to the crack den. Watch this space for new posts, new and unlikely alliances, and a shocking plot twist or two!

So much has happened since I went into soap rehab. There’s so many things I want to talk about! At the top of that list is my favorite guilty pleasure these days: Y&R.

Y&R is getting a LOT of attention these days. Maria Arena Bell and Paul Rauch are making some interesting choices for the show. Y&R is becoming a hybrid of Classic, Old-School Y&R and a more modern version. They’ve made some very dynamic moves with mixed results (and a mixed reaction from the audience).

There are two main reasons I’ve been glued to my screen this spring and summer. (Actually, three.)

Numero uno is Michael Muhney’s performance as Adam Newman. Not only has Muhney ably stepped into Chris Engen’s shoes, his performance has kicked

the Adam story into high gear. Muhney’s Adam adds a layer of fun and mischief that wasn’t present in Engen’s Adam, and it’s made the dark Adam story much more fun to watch.

As captivated as I am by nuAdam, he’s not my favorite Y&R character. You see, a good Y&R day is a Mary Jane day. I love this unhinged, Gothically-crazy character, played brilliantly by Stacy Haiduk. Mary Jane – who viewers now know is Paul Williams’ sister (and Jack’s ex) Patty – is a classic soap character. She reminds me of some of the beautiful, unhinged characters from the 1970s and 1980s (Linda Anderson on DAYS comes to mind, as does Janice Frame on AW). 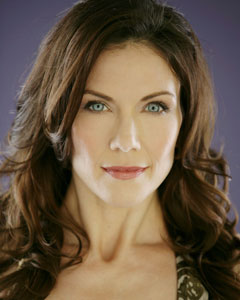 Mary Jane is a very complex character – damaged, obsessed and mistrustful of those around her – and in lesser hands she’d be a one-note villainess. But Haiduk has done a brilliant job of showing the audience why Mary Jane is who she is.

And she’s had help from perhaps the most clever and unlikely “supporting character” ever to appear on soaps: her cat, Kitty. Viscerally, it’s a spectacle you just can’t look away from: A grown woman is talking to her cat. (Yes, Jack, that cat IS dead. And stuffed.)  Symbolically, Kitty tells us so much about Mary Jane. She’s lonely and mistrustful and can only talk to Kitty. And as much as MJ loves Kitty, she was also angry enough at Kitty to, well, harm and kill the cat. (And we know if someone’s willing to harm an animal, they’re likely to harm a person too……)

NEXT: What’s not so hot in Genoa City