Even the elves that live in his hair love Mr. Schuester.

I’m still missing the late and lamented Ugly Betty. It had such a great season this year and it’s so disappointing that it’s gone.

Betty had so many of the qualities that are present in great soap: a lot of romance, a lot of heart, a sense of humor and most of all, a sense of family. It’s been a textbook example of the ups and downs of soaps, and how very tricky it is to balance all of those elements without going over the top – or running the story train off the tracks.

In many ways, Glee is a very similar show. I’ve been a fan since its debut, principally because of the killer combination of some great characters and a lot of great (and sometimes underappreciated) music. I love the romance, the humor (especially with the scene-stealing Brittany, who’s like a young Rose Nylund on Red Bull and Ritalin).

But Glee has also driven me crazy with some of its inconsistencies, its tendency to bounce all over the place and the fact that some characters hog airtime while others languish on the back burner.

Like Ugly Betty, it’s a show full of emotion and heart that does go over-the-top. Those are easy shows to be drawn to and to love – and it’s easy for those shows to go way off track if they don’t manage the stories they tell and go back to the core of the show. That’s how Betty lost its way last season.

The last two weeks of Glee could be a textbook example of the lessons I wish daytime showrunners would learn. 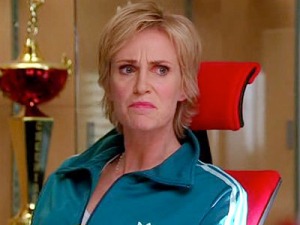 There was the Madonna episode. A great idea, right? Songs that everyone knows, the characters that we love…..automatically equals a win-win, right?

Yet that episode was, for me, one of the most disappointing of the season. It seemed forced to talk about Madonna so much in one episode, and the songs didn’t seem to match the scenes very well…..which in many cases were forced onto the characters. (Sound familiar? It’s just like on daytime, when characters are suddenly forced to do things that make no sense – which happens way too often.)

Like a Virgin and What It Feels Like For a Girl, in particular, seemed very out of place and weak.  It was a disappointment, saved only by the admittedly awesome Sue Sylvester version of Vogue.  That song worked, by the way, for the same reason Sue works so well and is so popular: She’s the most consistent character on the show. Sue’s worship of Madonna was in character for her – well, it made sense in the admittedly off-kilter world of how Sue C’s it!

Contrast that with last week’s episode. It may not have been as highly publicized as the Madonna episode, but it was the most emotionally satisfying one for me as a viewer so far. Every song had a direct tie to the characters and the story. The subject matter – loving yourself, loving someone else, what defines a family and a home – are as universal as you can get.

And the singing was top notch, especially with guest star Kristin Chenoweth. I wish Chenoweth was a full-time cast member; she and Matthew Morrison (Will) have great chemistry, and she understands the balance of acting and singing.

She’s been a part of several of my favorite moments on the show. (When she hits the high notes at the end of Maybe This Time – and in the most recent episode, Home – it sends shivers down my spine and gives me goosebumps.) 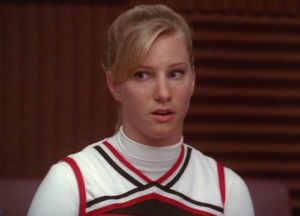 I have to applaud Ryan Murphy for this most recent episode. I’m sure younger fans did not embrace this episode, since most of the songs predated their births by a decade or more.

It was a risky gamble to have two Burt Bacharach songs, including a nearly five-minute Chenoweth/Morrison duet. Bacharach is a classic, as is his music. But for many teenage Gleeks, the only Burt they know (other than Kurt’s father, of course) lived on Sesame Street.

It was even RISKIER to have Kurt (the glorious Chris Colfer) sing A House is Not a Home as a baldly vulnerable love song to his crush, BMOC (and potential future stepbrother) Finn.

There wasn’t a song, or a scene, that didn’t leave me with a lump in my throat or tear in my eye, and it’s because it comes down to story, story, story. It always does, and it always will.

When the story is there, when the characters are well-developed and we know who they are, then everything else just flows from it. As it did for every one of these characters in this episode. (If you haven’t seen it yet, I highly recommend it.)

Honestly, it’s no fun to criticize soap show runners and writers. We know it’s a tough market and that soaps are, if not dying outright, shrinking and changing. But insanity is running into the same problem over and over and not responding to it any differently. I wish the remaining soaps would learn from those mistakes, but if they don’t we fans of serialized drama will continue to flock to nighttime television and the Web for well-done, heart filled storytelling.