It’s hard to believe this moment was almost 20 years ago, but I just saw this again this morning, and had to share it again.

I respected Fred Rogers’ work so much. Heck, I’ve even ferociously defended his legacy.

We were born and raised in the same area, and his approach to the world is one I aim to emulate, though I doubt I have his patience or sense of purpose.

He’s been gone for over 10 years, but his work is still all around us.

The night that Mister Rogers’ Neighborhood and the soap community intersected. What he says in his speech is simply stunning – gorgeous in its humanity and its simplicity.

I’ve just gone to We Love Soaps, where Roger Newcomb has posted the Daytime Emmy nominees that were announced this morning on TODAY.

Here are my brief observations:

The main four acting categories seem rather solid this year. There are a few nice surprises (kudos to Tamara Braun for her nomination as Ava for Days). There are also a few omissions, but I’m looking at these twenty names and there’s no who-did-they-pay-or-sleep-with-to-get-THAT-nomination moments.

The younger actor/actress categories seem pretty solid too, with one exception: I can’t understand how EJ Bonilla, who spent half the year off-canvas and has been playing a resoundingly unpopular character for GL, was nominated.

On the other hand – ALL MY CHILDREN? For Best Show? In what alternate universe would that be? AMC was in freefall for most of last year.  B&B – okay, I’m not the biggest B&B fan, but it’s solid. Days? Are you kidding?  No OLTL or Y&R? 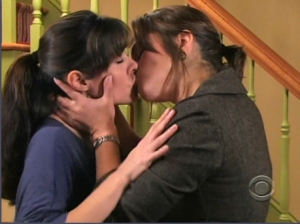 And yes – I am looking over into Otalialand, and I see the lit torches and throngs gathering to protest Crystal Chappell’s omission.

And yes, I agree Crystal Chappell (a.k.a. “The Goddess”) should be nominated every year; in fact, the Emmys overlooked Gina Tognoni and Kim Zimmer this year too (although all three have won Emmys before).

But I think much of 2008 for Olivia (and for Crystal) was a lot of laying the foundation for the wonderful Otalia story we see now. (These awards account for January 1 to December 31 of 2008.)

I know that much of the second half of 2008 was a nice, slow burn build up for Olivia and Natalia, but I think as much as fans love EVERY beat of the story, the moments most likely to get the attention of Emmy voters all happened in 2009.

I love those small moments – I think they’re some of the best reasons to watch any story – but they don’t always translate into nominations.

Emmy voters tend to go for the dramatic. (Susan Haskell – a deserving nominee – had the benefit of a very dramatic, controversial story.)

I know Olivia had the heart transplant in this time frame, but since that was the beginning of the story, I think the context of how important an event it was may have been lost on the voters. So though I’m somewhat disappointed that Crystal wasn’t nominated, I am hoping the amazing work she is doing now WILL be recognized next year.

I do worry that all of the phenomenal work Guiding Light is doing this year will be ignored by next year’s Emmys, especially if the show doesn’t find a new home.

There are easily a half-dozen or more current performances on GL worthy of recognition: Chappell and Jessica Leccia, Jeff Branson and Tognoni, Grant Aleksander, and Justin Deas to be sure. (Kim Zimmer is always nomination-worthy, as well.) I’d throw in a nomination for Orlagh Cassidy as Doris Wolfe, too – she defines awesome supporting actress!