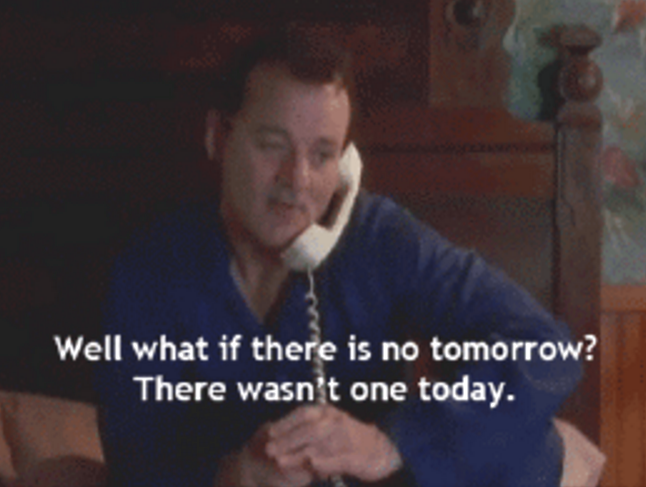 Tune in tomorrow? What, to watch someone else die?

Days Of Our Lives has had a lot of press lately. The Necktie murders, the return of popular vets, the refocus of the show.

Of course, the last few months have been the latest version of The Plan To Save DAYS ™.

But how anyone thinks this is “fresh” or “new” is beyond me. Watching DAYS these days is like living in the movie “Groundhog Day.”

DAYS has done any number of serial killer storylines, enough to make the Necktie Killer story seem like a really tired retread.

Stefano is dead – yet again. I know there may be some mitigating circumstances to this one (Joe Mascolo’s health), but still, can there be any mystery in this at this time?

But perhaps the biggest retread is that we are again talking about John’s parents.

Does anyone still give a hoot about this?

Seriously. This completely beggars belief. One retcon would be acceptable. How many times have we been told who he was? (Four? Five?)

There was just a HUGE story during the last Plan to Save DAYS ™ that gave us the definitive story – John was the result of a Brady/DiMera pairing.

And now suddenly he’s not? So….for what reason, exactly? Is he going to be related to A Martinez? Are the DAYS writers just spinning a giant wheel to see what name pops up?

This should be a surprise to no one. Aside from the youth stories, the show is mostly a retread. And some of it is working. Seeing Steve and Kayla is great, and Belle/Philip/Shawn is at least somewhat interesting.

But the other stories are just repeats of stories DAYS has done in the last few years. Of course a show can and will repeat some stories (pregnancy puzzles, infidelity) but most shows don’t copy so heavily from their own past.

Even the Steve/Kayla story has Ava redux, and as much as I love Tamara Braun, this is a repeat of a story that didn’t work the FIRST time (Emmy notwithstanding).

This should be no surprise, considering that Dena Higley, a writer with several previous tenures at DAYS, is at least partly responsible for the current story.

What’s different this time? Perhaps that DAYS is trying to make us the Saddest Viewers ever.

After all, it’s truly been more like Days Of Our Deaths lately.

The death toll has been astonishing: Paige, Daniel, Serena, Aiden, Bo, and Will.

I almost understood the other choices. I was sad for the loss of Aiden, but if they were clearing the decks, fine. But why Will? He had roots in every corner of Salem.

Was the backlash against the LGBT stories that strong? Was the recast playing Will that unpopular? Whatever the reason, KILLING the character seemed like a bad idea at best, a brutal slap in the face to fans at worst.

Every show is fighting for survival. I get it. But blowing up the foundations for a quick ratings bump isn’t going to help sustain any show. Wheeling Justin, Adrienne and Eve in, only to wheel them back offstage almost as quickly as they arrived, isn’t a good move.

We can only take so much of the now-you-see-them-now-you-don’t shell game that DAYS has played on viewers in the last decade.

Hiring the same hacks that blew up the last show they were on is not new, or refocused, or edgy. It should have surprised no one when the chainsaws came out.

And for the love of Alice Horton, DAYS, stop killing all your characters. We’re all one call away from the suicide hotline! Give us SOME reason to watch other than corpses and forensics. We can get that on Criminal Minds.