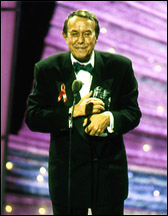 Note: I know that a lot’s been said lately about the exciting new things happening for serialized shows, and I’m eager to look to the future. But the future is better understood when we put our past into context.

I take any opportunity I can here to sing the praises of the late Douglas Marland. Today would have been his 75th birthday.

Marland died way too young, and he’s been sorely missed since his death in 1993.

I’ve been lucky to have a few great, wonderful experiences as a result of this blog. I’ve written an essay that will be published later this year in an academic journal (!), I had the good fortune to see one of my favorite shows being made, and I’ve met or talked to a number of talented professionals.

But I have to say, talking about the work and legacy of Douglas Marland ranks right up there.

Two years ago, Marlena Delacroix and I remembered the Marland magic on the anniversary of his untimely death. It’s worth remembering him again today. If you’d like to check out those posts, take a look at Marlena’s blog. (The posts, from March 2008, are under the “Yearning for Yesterday” tag.) We talked to several ATWT and GL actors.

As with stunning performances that have since slipped into the ether, it’s hard to quantify what was so fantastic about Marland’s work for younger viewers if they’re not able to see it.

When he fired on all cylinders, it was the perfect balance: dramatic yet realistic, romantic and filled with love for friends and family, yet rocked by great villainy and anger.

It was, in short, a wonderful story, and Marland will forever be remembered as a master storyteller.