Congratulations are in order for The Bold and the Beautiful. It’s enjoyed a recent rise in the ratings, and last Sunday night, it won the Emmy for Best Show for the first time in its 22 year history.

I have to admit, though: B&B drives me crazy.

I think that most soaps are pretty schizophrenic these days. Any show with a history to draw on has had to compartmentalize, and every show on the air has had a hard time drawing stories aimed at various demographic groups together in a cohesive way. But B&B is seriously, seriously schizo – and maddening to watch.

I get that B&B goes for the campy. The show recognizes that some of its scenes border on parody, which is why Ronn Moss (Ridge) and Kyle Lowder (Rick) have appeared on The Soup.

And it can be a very fun show to watch. The story of Jackie the cougar and her hot, muscular cub Owen has been played mostly as a lighthearted romance and sex romp. (Side note: Lesley Anne Down is magnificent and has never looked more beautiful.) The return of Rick Hearst as Whip is a bonus; Hearst plays romance and smarm so well. Any scene with the hysterical Alley Mills (Pam) is a hoot, especially if it involves her tormenting Donna (Jennifer Gareis).

And B&B could literally have Susan Flannery – the great Stephanie Forrester – read the phone book and I’d watch. 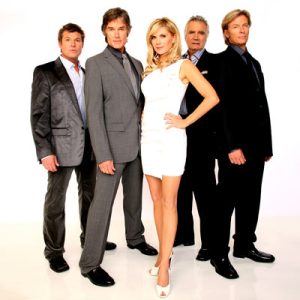 WHat drives me crazy is the romance go-round. The cornerstone of ANY soap is its romantic pairings, and every show wants to keep things fresh and spicy. But B&B takes that to an extreme, playing musical chairs with nearly every couple it has. I understand it’s a half-hour show, so the pool of potential mates is a bit shallower, but that’s not the issue.

The template for this – and the very worst of it – is the Ridge/Brooke/Taylor triangle. I watched last week and winced as Ridge declared his love for Brooke for approximately the 492nd time. I watched these three play out the recent wedding scenes (I *think* it was a Ridge/Taylor wedding, but who the hell knows for sure?) and it was embarrassing for me as a viewer. The dialogue might have been appropriate for twentysomethings, but three fortysomething fools acting like lovesick idiots was just unwatchable.

More to the point, it was unbelievable. I no longer care about Ridge or Taylor, or believe a word they say, and Brooke’s likability and believability has also taken a big hit. When you simply cannot trust or believe a word out of a character’s mouth, why watch them? When a character’s entire point of view changes daily, or weekly, it’s hard to invest in them as a character, or care about who they love, who they hate and who they’d like to sleep with.