It’s been almost a month since we first heard the news that Guiding Light was dropped by CBS.

I’m still dazed and confused. This isn’t the five stages of death or anything like that. I’m just not sure what to think about it all, because reports of the patient’s death may be premature.

For one thing, GL is, along with Y&R, the finest hour on the air right now. I mean, at this point I’m actually looking for things to complain about! But I’ve been so entertained by GL, and it keeps getting progressively better. Springfield has a sense of cohesiveness and community that I haven’t seen on ANY soap for years.

Stories are feeding into each other, and even the most throwaway conversations have a purpose and a context, often a historical one. Characters are remembering past events, relationships and battles, instead of living in a vacuum.

I’ve said a thousand words about the magnificent Otalia story, but there’s a lot going on that’s worth watching. The latest rave I have is the introduction of James Spaulding. Zack Conroy looks like his onscreen parents, and he’s added a new energy to the crazy Spaulding family.

And better yet, I think James brings out something in Daisy – and in Bonnie Dennison – that Ellen Wheeler’s seen for years but that hasn’t clicked with the audience. James and Daisy have amazing chemistry, and around James, Daisy becomes an interesting character. Yeah, I know, I’m not in the teen demographic, but the James/Daisy pairing reminds me a bit of the Edward/Bella coupling from Twilight.

Mallet, Marina and Frank have the thankless roles of being the “good” guys (read: boring), but we’ve seen a new side to Frank lately. Frank Dicopoulos’ scenes with Justin Deas, where Frank raged at Buzz about having to wait his turn only for it to never come, was fantastic. And the Henry-is-Shayne’s-son story has a lot of potential to be a magnificent umbrella story. (Wait until Reva learns about her new grandbaby!)

The other lack of finality? Is that Telenext is searching for a new home for GL. 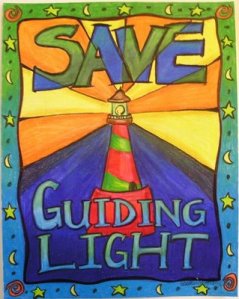 It’s been interesting to read soap blogs vs. the soap press. The magazines reported the cancellation without a lot of reporting on the looking-for-a-new-home aspect of things. And perhaps understandably so. In a historical context, that’s not been a very successful effort.

There wasn’t enough time to find Texas or Another World a new home when they were cancelled. Edge of Night lived for nine years after it changed networks; Search for Tomorrow lived for just over three years when it went to NBC. They’ve been there, done that, and don’t want to get anyone’s hopes up. Broadcast TV is an extremely challenging market right now.

But the blogosphere is more optimistic about GL’s chances of landing elsewhere. And rightfully so – it’s a new day, and a new playing field.

Broadcast TV might not have a space for this show, but an engaging, interactive show with a dedicated audience is a perfect fit for a network with a need to connect – and stay connected – to its viewers. Viewers that tune in to GL every day are way more likely to continue to watch other shows that follow it.

For some reason, this juction in the road feels very different. A new network for GL isn’t just a stay of execution for an aging show, or a delay of the inevitable. It’s a new venue where a very vital and vibrant story can live. These new possibilities feel like a new door and a new beginning; a new way for us to watch serialized drama and new platforms for us to do so.

They may look different than what we’re used to – the shape may change, the frequency may change – but if it captures the heart and essence of the fictional universes that we love, we’ll follow them anywhere.

And in case I’ve been subtle thus far, here’s an open plea to Lifetime: PLEASE PICK UP GUIDING LIGHT (and, if it leaves CBS, As The World Turns too)! I’ve seen almost every episode of Will and Grace, Frasier and Reba by now; surely, you can make some space in your schedule for GL. There’s some great advertising and marketing synergies. And you could live up to your motto of “Lifetime Original Programming!”

You can remind these folks that you appreciate GL and would be happy to watch it at a new home (or on the Internet).

6 thoughts on “Dazed and confused”