After yesterday’s heartfelt and intense post, I wanted to talk about something a little more lighthearted and fun. I want to share with you one of my guilty pleasures.

This may come as a surprise, since I’m always complaining about the abundance of crime, death, forensics and darkness in both primetime and daytime. But I’m glued to my seat on Monday nights to watch this show.

It’s true – Castle is hardly reinventing the wheel. We’ve seen similar shows before, like Hart to Hart, Remington Steele, Scarecrow and Mrs. King, and of course, Moonlighting. And there’s been a few twists in every show I’ve been able to guess beforehand.

But it feels like a fresh coat of paint on a traditional format. We haven’t seen a lot of lighthearted mysteries since Murder, She Wrote went off the air. I mean, who doesn’t love Angela Lansbury? But the more I watched that show, I wondered (a) how the hell did spinsterish Jessica Fletcher have SO many relatives? and (b) isn’t it a bit odd that they’re all dead or in jail?

But I digress. There are a few reasons I’m enjoying Castle, and they’re reasons that I think some daytime shows could take a lesson from. 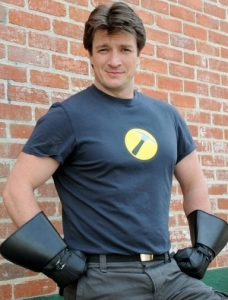 An appealing lead. Let me just get this out of the way: I think Nathan Fillion is incredibly sexy and attractive. I also think he’s a genuinely smart, nice guy. (Smart because I’ve read his blog – he’s definitely an intelligent, thoughtful man.)

That’s come across in almost everything he’s ever played in. And what makes him even hotter, quite frankly, is that he knows that women (and some men!) perceive him this way, and he makes fun of that, rather than buying into his own PR. (See his performance as “Captain Hammer” in Dr. Horrible’s Sing-A-Long Blog as an example.)

I get that writers want to dirty up our heroes or anti-heroes to keep them interesting, but so many shows these days have leads who are all darkness and no appeal. It’s hard to root for rapists, mobsters, and killers – there’s got to be a balance somewhere. Soaps could use a few charming, Richard Castle types, played by actors as talented as Fillion.

A balance of light and dark. Yes, Castle features a lot of story twists and turns like murder and violence. And although I appreciate how well written some of the crime and forensic shows can be – especially the L&O’s and the original CSI – those shows burrow so deeply into the darkness of the acts that it’s hard for me to watch.

Castle does takes crime and its victims seriously; there was a beautiful scene last night between Beckett, who’s driven to be a cop partly because her mother was murdered, and the daughter of a murder victim.

But overall, there’s a great balance of light and dark here. There is a huge current of humor running through almost every scene, and a big dose of romantic tension as well.  In that context, solving the crime becomes a great catalyst – instead of an overwhelming depressant.

A couple with chemistry. That romantic tension comes from the friction between writer Castle and cop Beckett (played by Stana Katic).

I can see why some critics say that we’ve seen it all before. But Katic and Fillion have real, enjoyable chemistry. (Perhaps it’s because both actors are Canadian?) Beckett seemed like a stone wall (and a Mariska Hargitay clone) in the first few episodes, but she’s becoming more of her own character, and the way Beckett and Castle play off of each other is enjoyable to watch.

It’s nice that they’re doing a “slow burn” with these two, and hitting all the beats. Daytime often feeds us insta-couples these days, couples that don’t have a tenth of the chemistry that Beckett and Castle do, but are sold to us as The Next Big Supercouple.

Lightning doesn’t always strike on the stage as it does on the page, so both the writing and the acting have to be good for it to work. But any good couple is going to need to pass a chemistry test and let us get to know them.

Many daytime shows (especially AMC and ATWT, where the only truly romantic couple is Luke and Noah) could use more romance and another grand, romantic couple to root for.

One thought on “Shameless guilty pleasure!”